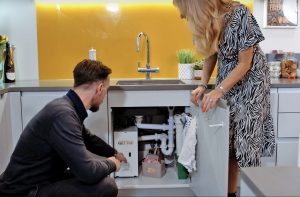 If you’ve popped into a friend’s house for a quick cuppa recently and found yourself with tap envy, you’re not alone. Because even though it’s been years since a tap was ‘just’ a tap, what’s really hot right now is a boiling water tap. But what essentially are the facts about boiling water taps? And if you’re tempted to buy a boiling water tap, what do you need to know?

Well, as that friend or neighbour will confirm, using a boiling water tap to make instant cups of tea, coffee and other hot drinks is just the beginning. There’s all the other stuff you can do – blanching veggies, throwing spaghetti into ready-boiling pans of water and making stock, gravy and soup in seconds. And how about degreasing roasting tins, sneaking a packet of Super Noodles and rinsing sticky, muddy football boots clean in minutes?

“A boiling water tap used to be thought of as a luxury, only for very expensive and luxurious kitchens,” says Alexandra Rowe from the British boiling water tap manufacturer QETTLE. “But,” she continues, “that’s just not the case anymore. The facts about boiling water taps are that now, thanks to clever new design, materials and technology, you can buy a 4 in 1 boiling water tap for just over £500.00. And without compromising on features, quality or functionality.”

That’s true. The QETTLE Original 4-in-1 boiling water tap, which is available with three different size boiler tanks – 2 litre, 4 litre and 7 litre – starts at £505.00. And that’s a complete cost, which includes the tap, its boiler tank and undersink filter system. The price tag also includes UK shipping, so getting your hands on a boiling water tap without busting the budget is realistic. Opt for a QETTLE Mini, which dispenses just 100°C boiling water and cold filtered drinking water, and the cost is even kinder to your pocket – from £405.00.

Another essential boiling water tap fact to consider is whether servicing is required. QETTLE boiling water taps don’t need any maintenance other than having their filter cartridges replaced twice a year, but it’s not unusual for manufacturers to advise a boiling water tap is serviced by a specialist engineer on an annual basis.

QETTLE’s Alexandra Rowe advises, “When it comes to taking a closer look at the facts about boiling water taps, safety is paramount. Boiling water taps that feature two-stage safety are best. A handle lock is essential and  there should be a safety clip, too. This ensures you can apply a ‘belts and braces’ approach to you and your family using your boiling water tap.”

Boiling water taps such as QETTLE Original and QETTLE Mini have been designed with the installer in mind, so if you’re comfortable with simple plumbing and understand water pressure, fitting a QETTLE boiling water tap is a straightforward task for a competent DIY-er. Likewise, it should be an easy job for a plumber.

QETTLE’s step-by-step installation videos, available on YouTube, are really helpful. For extra peace of mind, you could find out if the manufacturer offers an installation service. QETTLE does and will guide you through the pre-install checks and requirements, before arranging for a QETTLE trained and accredited installer to fit your boiling water tap.

Those Must-Know Boiling Water Tap Facts… at a Glance