How do boiling water taps work? Well, let’s start with what happens underneath the kitchen sink. Because whatever style of instant hot water tap you choose, they all have one thing in common – a boiler or heater tank that lives under your sink. Tanks vary in size and capacity, and critically, they also vary when it comes to the temperature they store water at. But more on that later. 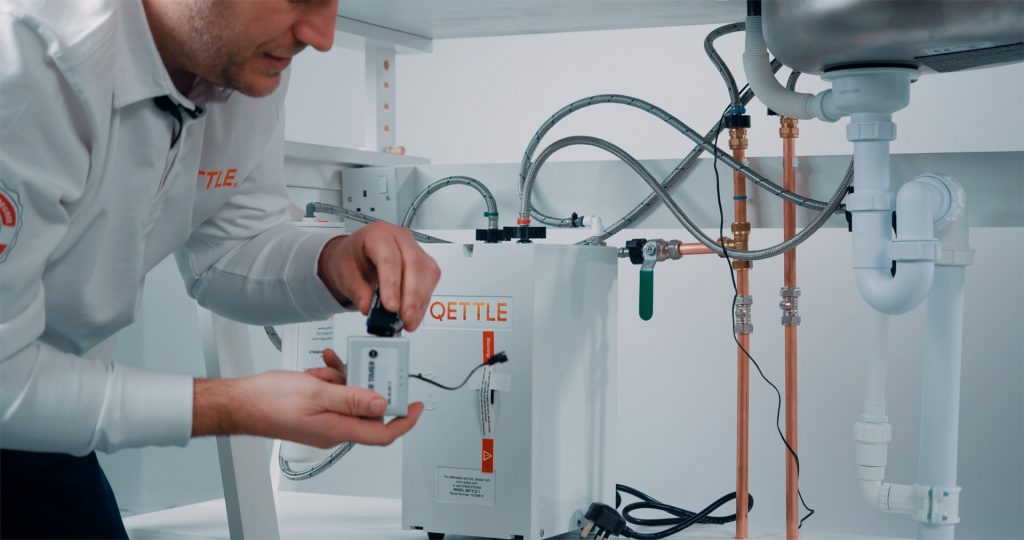 How do Boiling Water Taps Work?

To understand how a boiling water tap works, try thinking of its boiler tank as a big kettle. Water is fed into the tank, which has an element that heats it, and a thermostat. The tank is connected to the tap and feeds boiling hot water to to the tap. Usually, a boiling water tap will also have an undersink filter system. These serve different purposes for different products, but for a QETTLE tap, the filter system does two important jobs. The first is protecting the tap’s boiler tank from limescale (a product of hard water) and the second is ensuring the QETTLE’s flow of drinking water is free from unpleasant tastes and odours, such as chlorine.

What does a Boiling Water Tap do?

Now let’s focus on the way the tap itself works. Boiling water taps can offer 2 in 1 – e.g. QETTLE Mini – 3 in 1 or 4 in 1 functionality. A 4 in 1 tap does just as you’d expect and gives you four flows of water from a single tap – boiling water, filtered drinking water, plus normal hot and cold flows. Their fully integrated design means there’s no need for a separate instant hot or filtered drinking water tap.  You can bin your kettle, filter jug – and buying expensive bottled water will become a distant memory!

So how do you actually use a boiling water tap? Once again, taps differ in their design, but with a QETTLE tap, getting boiling water is safe and easy. All QETTLE taps feature two-stage safety, so to access boiling water, the tap’s safety clip must first be removed. Once the clip has been removed, a button on the top of the tap’s boiling water handle must be pressed down at the same time as the handle is turned clockwise.  This video is really worth a watch – it’s easy to see how the boiling water tap works, plus its safety features are expertly explained.

What about Filtered Drinking Water and Normal Hot and Cold Water?

To get filtered drinking water, you simply turn the handle anti-clockwise – and it’s good to know that for filtered drinking water, there’s no need to remove the QETTLE’s safety clip. So the kids can fill up their water bottles safely. On a QETTLE 4 in 1 tap, normal hot and cold flows of water are dispensed using the lever handle. Push it back for hot water, bring it forward for cold and regulate the flow by pulling it away from the tap. It really couldn’t be easier.

What’s the Difference Between a Boiling Water Tap and an Instant Hot Water Tap?

Now we’ve answered “how do boiling water taps work”, let’s go back to tanks and temperatures. Because once you’ve decided to buy a boiling water tap, this is where it’s worth doing your homework. Whilst many taps are advertised as dispensing boiling hot water, in reality, the temperature is more likely to be anything from 80°C – 98°C. Of course, boiling water is 100°C. So, beware buying a near-boiling, steaming or kettle tap, and shortlist boiling water tap manufacturers such as QETTLE, who make taps that deliver truly boiling water. Especially if you want to make a proper cuppa, or plan on using your boiling water tap for making speedy snacks such as noodles, soup and porridge.

On the question of how do boiling water taps work, one last techie point to consider… Remember how we said it helps to think of an instant hot water tap’s tank as a big kettle? Well, it also helps to think about where the steam escapes to. Boiling water taps that are properly boiling – and there are actually only a handful of them – tend to use pressurised tanks that allow steam to vent safely and minimally under the kitchen sink.

We’re talking droplets that, as with the QETTLE tap’s system, simply drain away, via a special waste pipe. However, with instant hot water taps that do not achieve a temperature of 100°C, be aware that steam will often be vented through the tap itself. That’s fine if you don’t mind your tap occasionally – and literally – letting off steam, but it’s not for everyone. how do boiling water taps work

In a nutshell, how do boiling water taps work? With a clever tank, a filter system and your normal mains water supply.