The clue is in the name. Any Kitchen, any size, any colour, any worktop… But fortunately for us, not just any tap! Leonie and her Any Kitchen team were one of QETTLE’s earliest kitchen retailer customers and have clocked up countless QETTLE sales since beginning to specify QETTLE Original and QETTLE Signature taps over two years ago. 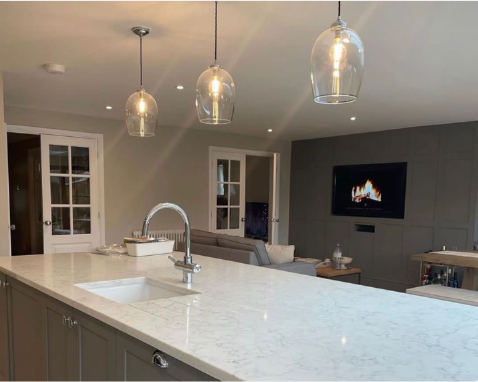 Based in Stevenage, Hertfordshire, Any Kitchen have been trading for just over 8 years, and like QETTLE, is a family run business that has been built on family values.

‘It wasn’t quite a kitchen table enterprise, but Any Kitchen began trading in 2014 when a friend and I formed our partnership from my dining room table, we’d previously worked in kitchen accessories, and we had good contacts in place. Fast forward a few years on, and my husband joined the team, shortly followed by a niece, brother and our son. Eventually, the dining room table couldn’t accommodate us and so we opened Any Kitchen’s high street design studio in 2018.’

At the heart of Any Kitchen’s success is choice, paired with the ability to add personal touches. And, once a customer has made key cabinetry and work surface decisions, it’s options across appliances and must-have products such as boiling water taps that really enable a kitchen to begin reflecting its owner’s preferences.

“Certain appliances have rocketed in popularity in recent years – statement extractors, integrated coffee machines, wine chillers and boiling water taps all occupy the top spots of people’s wish lists – and as far as boiling water taps are concerned, QETTLE tends to be our preferred choice. Few people can deny that the sheer convenience of having boiling water on tap is hugely appealing, but until recently, it has proved tricky to find a boiling water tap that delivers truly boiling water without being a budget buster.”

Leonie point is critical. The concept of boiling water on tap – whether for endless instant cuppas, or a wider range of kitchen shortcuts – appeals to just about everyone. However, price tags have often proved prohibitive. And let’s face it, whilst many of us have a dream kitchen in mind, the reality – especially if that new kitchen is part of a bigger renovation project – is that we have to budget carefully.

Fortunately, QETTLE, which has married clever design with quality materials, has provided a solution. And now, with prices starting around the £500 mark, a 4 in 1 boiling water tap can become a reality, rather than a ‘nice-to-have’.

“There’s been a real proliferation of boiling water taps in recent years, but in truth, very few deliver 100C water, and who wants a tepid cup of tea? We also like that QETTLE is a homegrown brand – there’s lots of tap design and making expertise behind the brand, and that’s really reassuring.

“We also love the accessory choices that pull everything together. The QETTLE Chiller is a brilliant add-on, and we’re also fans of the newly introduced QETTLE Signature Mixer taps – they’re lovely for a smaller sink, an island or a utility area, and match the QETTLE Signature 4 in 1 taps perfectly.”

“There’s now a dizzying number of online kitchen companies online and for a customer who’s just starting out on their new kitchen journey, I think the process can be quite intimidating. We try – from the get-go – to build a personal relationship and for the customer to enjoy each stage of the experience. Being able to recommend tried and trusted brands is a big part of that – it makes a huge difference if you can say, ‘Yes, that’s the tap I chose for my kitchen.’” 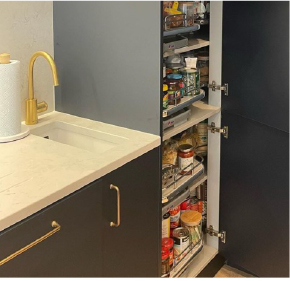 “There’s now a dizzying number of online kitchen companies online and for a customer who’s just starting out on their new kitchen journey, I think the process can be quite intimidating. We try – from the get-go – to build a personal relationship and for the customer to enjoy each stage of the experience. Being able to recommend tried and trusted brands is a big part of that – it makes a huge difference if you can say, ‘Yes, that’s the tap I chose for my kitchen.’”

“The coloured finishes really ramp up the glam factor – I succumbed to a brass finished QETTLE Signature in my own kitchen, and it never fails to turn heads! QETTLE also allowed us to place a bespoke order for a customer who wanted to partner a brass finished QETTLE Signature Mini 2 in 1 tap (shown above) with a normal mixer tap. I think, at the time, the QETTLE Signature Mini taps weren’t ordinarily available in coloured finishes – but because the engineering and colour finishing process is controlled in-house and within the UK, it was possible to place a one-off order. The customer was over the moon – and the sinks and surfaces just looked amazing, really slick.” 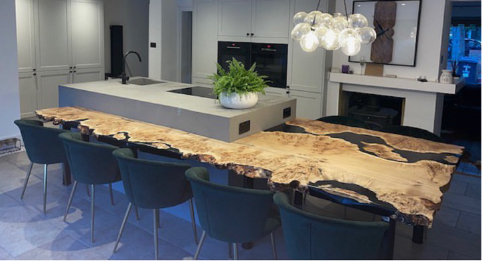 So, whilst we know Leonie’s got a soft spot for QETTLE’s brass finish, what’s her favourite use for her QETTLE?

“For me, it’s making frothy coffees – everyone thinks I’ve got some special, whizzy frothing gadget – or for filling up big pans with boiling water for pasta, vegetables and rice. That’s a great use – it really cuts down on hob energy and is a fantastic timesaver when you’re trying to pull those work and school night suppers together.“